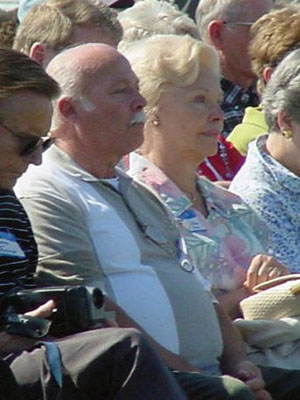 On the 8th of November, 2002, my brother (Egon Scheibe Jr.) and I (Erika Scheibe Seus) went on a journey to Crystal City, Texas. This was a journey we needed to make. Our parents, Grete Scheibe, now 89, and our deceased father Egon Sr. were internees at a camp there during World War II. After 60 years a reunion was being held. We were among “the children of the camp.” This is a story that needs to be told. It is a part of the history of our family.

My father immigrated to the United States from Kiel, Germany, in the year 1925, at the age of 17. He arrived with his mother and father (a naval architect) and his younger brother Fred. My father attended Cooper Union Art School and became a talented artist. Fred earned his PHD and went on to become a college professor.

My mother, at the age of 10, arrived at Ellis Island with her family in 1924, leaving behind their farm in Bremerhaven. My grandfather was killed at the age 33 in World War I. They were sponsored by relatives, learned English and made a new life here. My parents were active in the German community and met at one of their dances. They were married in 1937 and lived in Brooklyn, New York. I was born a year later.

The war broke out in 1942. On June 15th, the FBI went to my father’s place of business, handcuffed him, interrogated him and took him to Ellis Island. Agents came to the house and searched all our personal belongings. For the next 6 months my mother and I visited my father by ferry. At that time the building was deteriorating and conditions were deplorable. My parents were forbidden to hold hands by the guards.

This same scenario was occurring throughout the United States. Over 11,000 German Americans were being arrested, detained and interned all because of unfounded suspicions. They were denied legal counsel in behalf of their defense. Many were on the FBI’s list because of insinuations, jealous business rivals or hearsay, some because they belonged to various German clubs and organizations.

In December of 1942 our family was sent to an internment camp in Texas for “enemy aliens.” The site was a former migrant labor camp. There we were housed in barracks, curtains separating families. Facilities were in another building. Little did we know at the time, that this was to be our home for the next three years. I have vivid memories of the high chain link fence with barbed wire and guard towers. In the words of one internee Lothar Eiserloh; “Just the week before I had been pledging allegiance to the flag in school, then I got there (Crystal City) and I am looking at guard towers…” It was in this camp my brother, Egon, was born.

The camp housed people of German, Italian and Japanese ancestry. There were people there from all walks of life including doctors and teachers. Instead of wallowing in self pity or being idle, the internees formed a community. There were plays and concerts. Several schools were erected (German, Japanese and Federal School) staffed by camp and local teachers. It was here that I learned to read and write the German language. My father was the camp artist and also an instructor at one of the schools and was instrumental in the printing and illustrating of the camp newsletter “Das Lager.” He added amusing caricatures and cartoons to add a little humor to a tedious camp life. One of his drawings, obviously putting a happier face on camp life is below. In November of 1945 we were released from the camp. My father was considered a parolee and needed to report on a regular basis for several years later. Many of the families were repatriated, being sent to Germany on the ship “Gripsholm.” American children being sent to a country that was still being bombed!

As my brother and I drove along the long and desolate Texas roads to the reunion, we could only imagine the apprehension that our parents must have felt those 60 years ago.

The days that followed were an emotional roller coaster for us. We were 70 strong, we children of the camp. There were two mothers present of the original internees. Most parents were now deceased or were too elderly to make the long journey to the Mexican border town.

As our contingent first met in the lobby of the motel, there was an instant bonding. We began to show pictures and spoke of our memories at dinner that evening. The Town of Crystal City and Zavala County welcomed us with warmth and kindness. There was a breakfast in a school with speakers from the board of education. The school band played for us. We were Grand Marshals in the “Spinach Festival Parade” in Crystal City. The theme, dedicated to us by a local historian Richard Santos, was “And Justice for All.”

The opening ceremony held at the site was a moving experience. There we were rejoined by 90 fellow Japanese internees. When the Japanese bus arrived we were already seated at the ceremony site. We welcomed them with standing applause as they entered the seating area. We sat together under a clear Texas sky, cradled by a warm gentle breeze; we could feel the presence of our beloved parents. We were indeed the “Children of the Camp.”

It was heartwarming to hear an apology from the mayor of Crystal City. There were judges who spoke, a representative of the Texas State Legislature, clergy, several former internees, and the Historian of Crystal City, Richard Santos, who is a fine gentleman filled with ideals and visions. He helped plan our memorable weekend and is collecting pictures and memorabilia of the camp for their local museum. (Photos of the Crystal City Reunion) A memorial was also held at the swimming pool site at sunset. Wreaths were laid in memory of two young girls who drowned there.

The Japanese have erected a monument at the site regarding their internment there. We hope a plaque will be erected on the campsite in the near future stating to all and proving to all that thousands of German descent, as the Japanese, were also interned in this country during the war years.

Our heartfelt thanks to Karen Ebel, (daughter of an internee), Eberhard Fuhr, (internee) and Art Jacobs, (internee and author). Their relentless and untiring efforts made this reunion possible. Karen needs the help of all German Americans to pass bill the Wartime Treatment Study Act. The Japanese Americans have already received restitution and an apology. There has been some recognition of the wrongs done to Italian Americans during the war, but there has yet to be any formal recognition of the undo pain and suffering that the German Americans went through. Many were incarcerated from 3 to 6 years of their lives in these barbed wire camps for the simple crime of suspicion. Not once has any one of these people hurt, attacked or bombed anything.

I regret that my father was treated as a criminal. This wonderful man who built a nativity for our church and painted a life sized portrait of Walt Whitman which now hangs in our local high school library. Egon Scheibe was a faithful Steubenite for many years. He took delight in performing many puppet shows for the children at our Christmas party celebrations. He belonged to the parade committee and designed many floats for the New York Parades. Our parents taught us respect for law and order and our American way of life.

Our parents spoke of their camp ordeal in hushed voices or not at all. It is up to us “The Children of the Camp,” to make our stories known. They need to be in our history books. We ask for a long overdue apology from our government. Let there be justice, not for a few, but for everyone. This is after all America, the country to which our parents immigrated in search of a better life…”And Justice For All.”