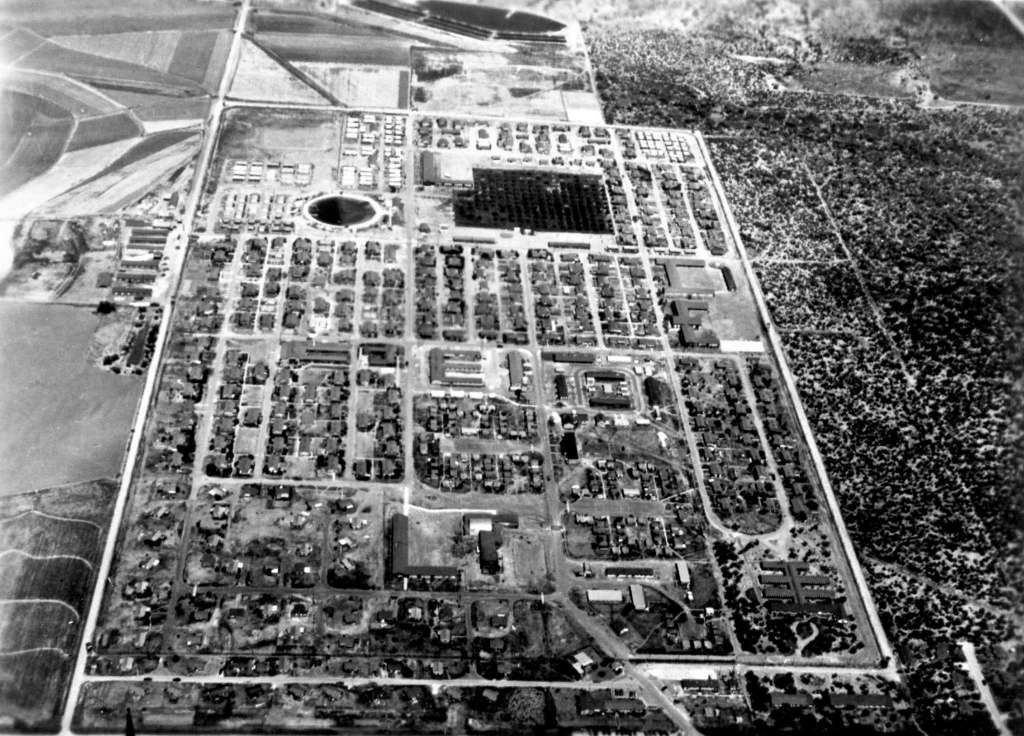 Originally a migrant labor camp, the INS began expanding the site in the fall of 1942, anticipating the need to intern large numbers of enemy aliens and their families. 41 three room cottages and 118 one room shelters already existed there, as well as service buildings and sufficient utility services for the approximately 2000 people originally anticipated. There were 100 acres to be surrounded by 10 foot high fences, guard towers and brilliant spot lights, and another 190 acres to be devoted to farming, personnel residences, etc. The first internees, of German ethnicity, arrived on December 12, 1942, and were expected to work on construction. (map of site with building drawings) 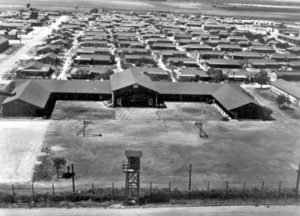 Six types of housing were eventually provided. One room shelters 12’ x 16’ were for couples and those with small children. Other buildings were divided into various sized apartments, for larger families. 20 used Victory huts were also moved onto the site. A few cottages had an inside bath and toilet, designed to house families with special needs, but most internees used centrally located facilities. An initial allowance of cooking utensils, furniture, bedding, etc. was provided, and could be replaced if the worn out items were turned in. 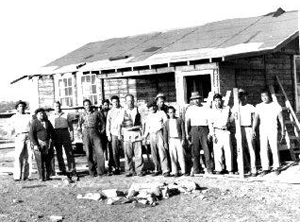 At first food was brought to each family, but by September 1943 internees were issued a new form of camp money, “coupon checks,” a token system devised by camp officials to allow inmates to purchase needed foodstuffs or clothing items at a general store. Milk and ice continued to be delivered. Originally, a family of two adults with two small children was  allotted $6.00 worth of coupons per month. In 1944 the amount was raised to $6.50.

Security for the camp was provided by two sets of guards. A Surveillance Division patrolled the fence line and provided the armed guards for the towers, while an Internal Security Division operated a small police force inside the compound twenty-four hours a day, “ to preserve order, count internees, and generally determine the state of affairs in the camp. … Very few internee fights or displays of violence have occurred. There have been no escapes or attempted escapes.” (O’Rourke, 14-15. In the first winters, mud was everywhere. A 70 bed hospital, built in 1943, was surrounded with mud “practically up to the knees when it rained.” Medical staff had to store extra, clean shoes and stockings inside the building, to put on after they waded in and washed up, until a better walkway was constructed. (O’Rourke, 22.) The winter of 1942-43 was the coldest on record in the area, with snow on the cactus and icicles hanging from roof eves. The summers brought intense heat and frequent dust devils. Internees encountered scorpions, red ants, rattlesnakes, and other insect and animal life they’d never known before. Sunburns and heat rashes were common. 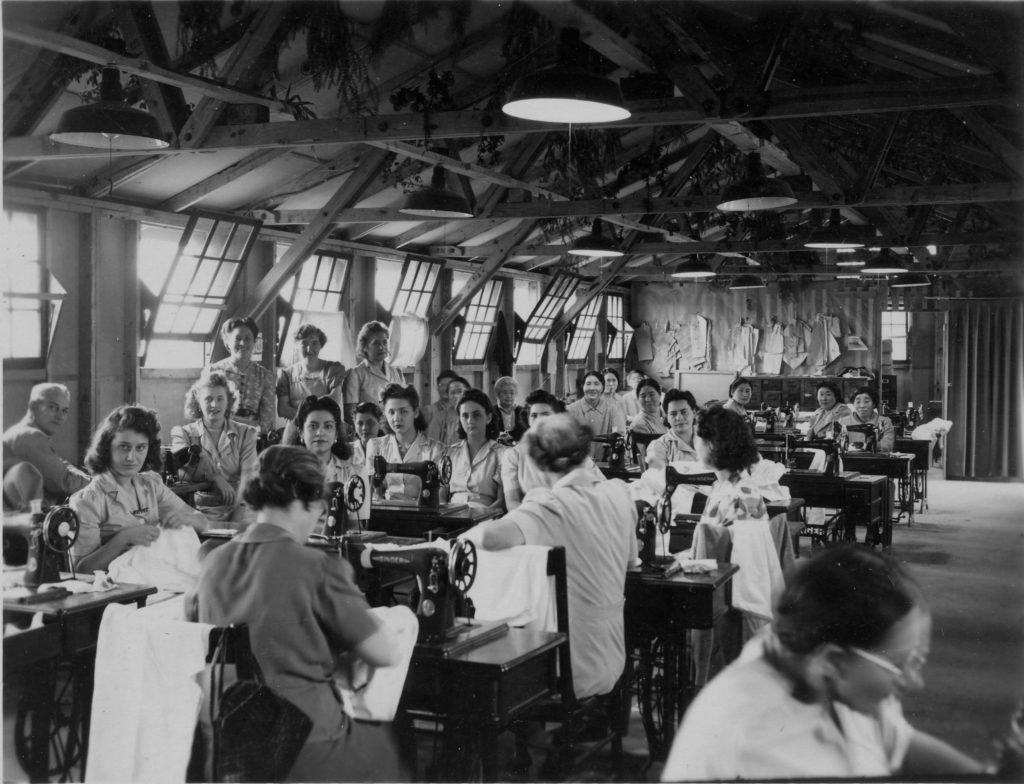 Internees were employed in various camp enterprises, for ten cents an hour salary. A group of men cleared water hyacinths out of an old reservoir, which was then used as both reservoir and swimming pool. Over the years the camp became a small town, complete with grocery stores, butcher shop, furniture and mattress factory, beauty and barber shop, fire department, etc. 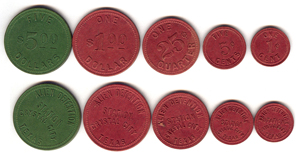 When first opened, there were few diversions from the monotony. A perimeter road, dusty in summer, awash with mud in the winter, could be walked. A small library of donated books was available. A popular diversion was dreaming over Montgomery Ward (known as “monkey ward”) catalogues. Originally, women shared a few sewing machines, making curtains and children’s clothing. Owning cameras was banned until some time later. Movies were occasionally shown outdoors, against a building wall. As the population swelled, internees were able to attend movies twice a week, swim once the pool was complete, and use their own funds to plant gardens around their dwellings. (See “Daily Life at Crystal City Internment Camp, 1942-1945” for more details.) A Supervisor of Education had been hired in April 1942, to plan the development of a school system. Setting up these schools and getting adequate teaching staff was challenging. Teachers fluent in English, Spanish, German, or Japanese were needed to work with the children. Both a German and a Japanese school were established, and by the autumn of 1943, an official school, based on Texas educational regulations, was in place for those students wishing an American education. Nursery schools and kindergartens were begun as soon as the camp opened and were run by the internees. 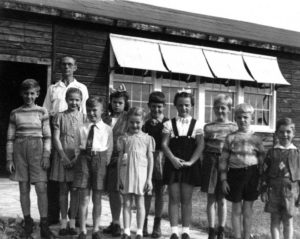 The Crystal City family camp was considered the show place of the internment program, so much so that the INS made a propaganda movie about it in the mid-1940s. Show place or not, it was a prison. (Alien Enemy Detention Facility, Immigration and Naturalization Service, 1946. 16 mm videocassette, N3-85-86-1, N.A., College Park, Maryland.)

“From its inception through June 30, 1945, the Crystal City camp inducted 4,751 internees (including 153 births). Of this number, 954 Germans were repatriated in two movements (February 1944 and January 1945), and 169 Japanese were repatriated in August 1943. One hundred thirty-eight internees have been released or paroled, 84 interned at large, 73 transferred to other facilities, and 17 have died. In practically all cases, the women and children were voluntary internees.” (O’Rourke, 8.) (By the time the camp was actually closed in 1948, twenty-nine internees had died.) grave markers of four internees 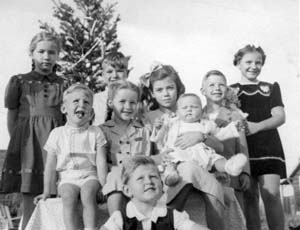 It is of interest that Joseph O’Rourke’s Historical Narrative concludes “…it is the general opinion of our staff that voluntary internment should not be permitted. …our observation has formed the opinion that a woman, because of her usual emotional state, will generally develop an anti-American complex through internment, even if no such prior attitude existed.” (O’Rourke, 32-33.)

The Crystal City, TX Family Internment Camp closed in February 1948, and the remaining internees, all of German ethnicity, were sent to Ellis Island, N.Y.

Until 2007 the only marker placed at the Crystal City, Texas Family Internment Camp inaccurately stated that only Japanese American civilian prisoners were held at this site during World War II. The Texas Historical Commission put up a more accurate sign in 2007 and pursued funding for eight interpretive panels, which were dedicated at the site in November 2011. On August 1, 2014, the National Park Service listed the site on the National Register of Historic Places, thanks to the efforts of William A. McWhorter, Program Coordinator, Military Sites Program, History Programs Division, of the Texas Historical Commission (see Register of Historic Places nomination) 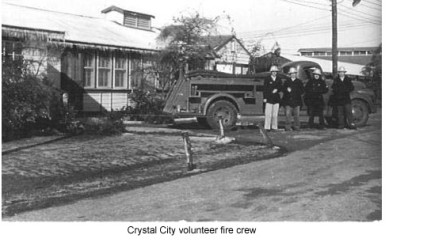 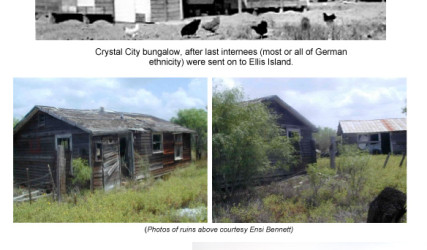 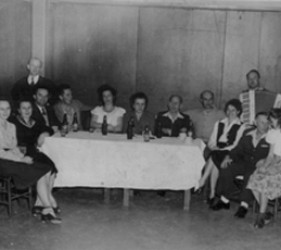 Crystal City 1947 Emma (3rd from right) and George (5th from right) gathering for some entertainment. Rose Marie had been sent to New York 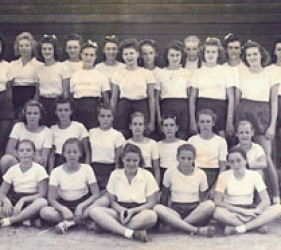 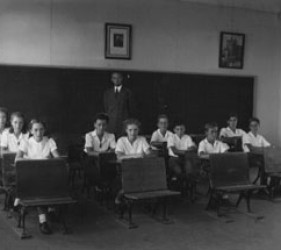 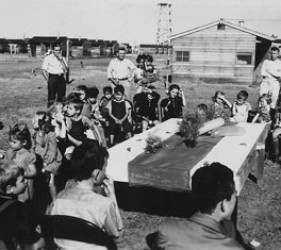 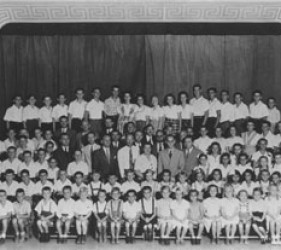 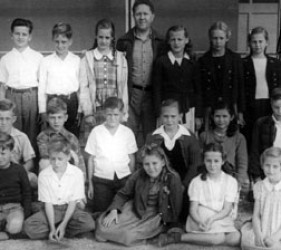 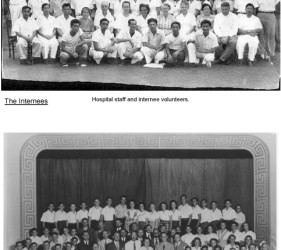 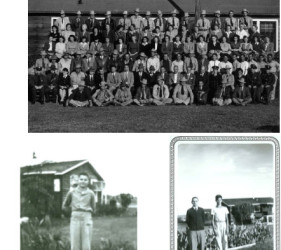 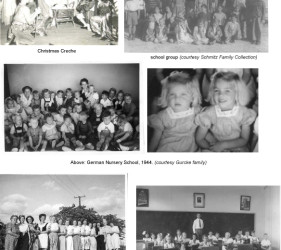 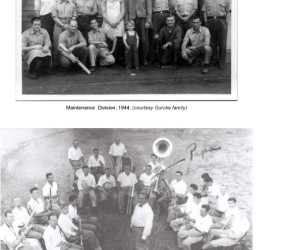 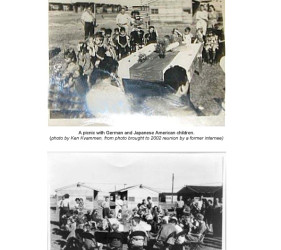 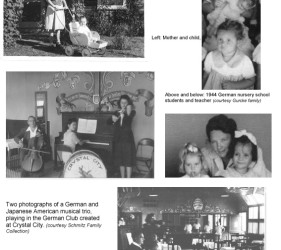 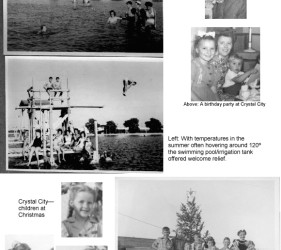 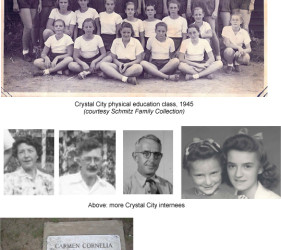 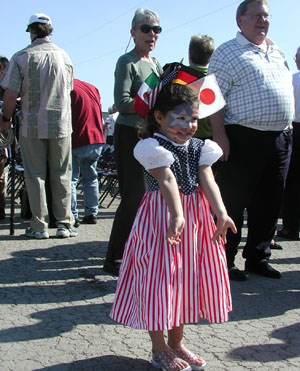 In November 2002 there was a reunion of former internees. Sponsored by the Zavala County Historical Commission and its able chairman, Richard Santos, the invitation coincided with Veterans’ Day and the Crystal City Spinach Festival, an annual event celebrating the mainstay crop of the area. (A statue of Popeye still stands in front of the town hall, as it did when busloads of enemy alien families were transported to the camp.)

Of the thousands of prisoners who passed through the camp during the war years, there were around eighty internees of German descent, originally from the United States or Latin American countries, a busload of Japanese Americans with ties to Peru and a handful of others. Most had been the children of the camp. (Additional pictures of Crystal City reunion)

As collective Grand Marshal they were feted at receptions and memorial services and included in the annual Spinach Festival parade. The parade featured the Spinach Queen and her court, local school bands, floats, pickup trucks full of high school and junior high athletes, flag twirlers and former internees. The streets were lined with onlookers, many of whom cheered as the visitors walked by. Some were curious enough to walk along with them, asking about their time as prisoners, or talking about their memories of the camp.

While the activities of that weekend included ceremonies and speeches, the real story of the reunion happened over meals, in motel parking lots, in vans on the way to an event—everywhere the former internees and their families gathered. Sharing a common experience, they were able to share the pain and bewilderment many still feel. Uprooted from their lives and transplanted into a life behind 10 foot high fences, with armed guards watching every movement, many still wonder why.

William McWhorter, historian with the Texas Historical Commission, reports: “The Texas Historical Commission’s archeological survey of two sites of the former Crystal City (Family) Internment Camp was conducted between April 15-19 of this year [2013]. Last month, our contractor Hicks and Co. completed their final report. … I regret we found next to nothing that pertained to the site’s history as an internment camp during World War II. The items located were almost entirely post World War II in age (e.g. nails, beer can pull-tabs, car parts, etc.) almost 100% non-internment camp specific. It turns out that there is a tremendous amount of polluted fill-dirt all around the pool area (f.y.i., we did not dig in the deep end of the pool), but we did survey the two bath houses associated with the pool, and the foundational remains of the Japanese elementary school.” 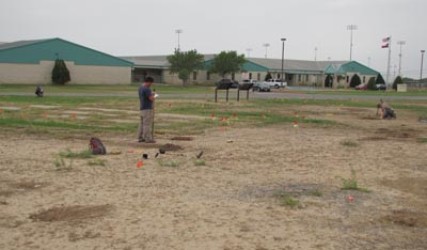 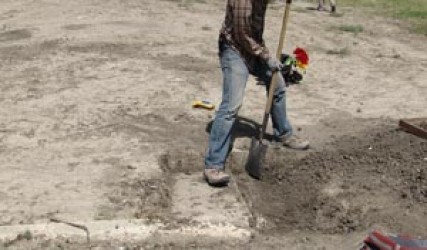