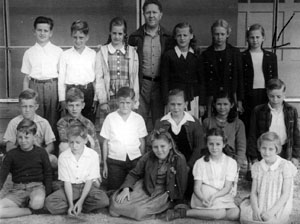 My mother, Charlotte Reseneder Dimmling, her sister, Othilia “Tilly” Reseneder Busse and my grandparents were interned in Crystal City from 1942 until December 1945, seven months after the war in Europe ended. How they got there and why they were there is truly an amazing, but yet sad, story.

Both my grandparents, Ottilie and Jacob Reseneder, were born in Germany and immigrated to the United States in 1926 for a better way of life. They had two daughters, Charlotte and Tilly, both of whom were born in the United States. My grandfather worked for an American company, Pfizer, but because of his long social ties to Germany, he belonged to a German social organization. This was not uncommon of German immigrants living in Brooklyn in the early 1940’s. Although innocent in his eyes, this wound up being the primary cause for the family’s internment.

As retold to me by my mother and aunt, FBI agents came to their apartment in the middle of the night. They woke them from their beds and ransacked their apartment. The agents proceeded to question my grandfather and without notice, took him away. For several days my grandmother did not know his whereabouts, until she learned that he was being retained at Ellis Island. The irony of this is incredible since Ellis Island, known to almost 12 million immigrants as the “front door of freedom”, was also a holding place for my grandfather as an “alien enemy” and a threat to the United States.

After a while, my grandparents, mother and aunt were told that they were being sent away. My grandmother did have the option of staying in Brooklyn with her daughters, but elected to go with my grandfather. Who wouldn’t? After all, my grandfather was the sole provider and she had no place else to go.

Except for what they were allowed to carry in suitcases, all of their possessions were taken. They proceeded to board a train and spent several weeks on a freight train crossing the country with absolutely no idea where they were being taken. They eventually landed in Crystal City, Texas.

During the next three plus years they lived in a world that consisted of barbed wire and guard towers. They were prohibited from leaving the grounds. Living conditions in the camp were much different than Brooklyn. My mother and aunt lived in a one-bedroom hut which only had enough room for a bed, a dresser and a chair. My grandparents lived in a similar one-bedroom hut.

All four were required to line up three times a day to be counted. When a whistle blew, no matter where you were in the camp, you had to run back to your hut, stand out in front and be counted. Armed guards were everywhere. 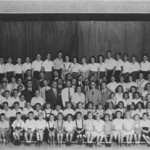 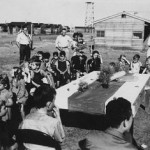 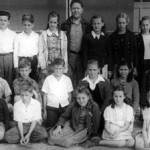 My aunt retells the story of how she sprained her ankle and had to be taken to San Antonio to get it X-rayed and during the whole time she was escorted by two armed guards. She was only eleven years old! During this time, both my mother and aunt learned German since both were Americans and did not know speak the language fluently, except for some spoken at home. It seems almost surreal that American born children, who both spoke perfect English, had to be taught a language they did not speak, although they were encamped for their ethnicity.

In private, both my mother and aunt have said that the living conditions in Crystal City were pretty good. Germans, along with Japanese Americans, built a swimming pool and had other amenities. However, both acknowledge that they were quite young and did not fully feel the impact of the dislocation. My grandparents, on the other hand, were devastated. Here were two people that came to this country in the hope of raising a family and providing their daughters with opportunities that they didn’t have in Germany, only to see everything, including their dignity, stripped from them.

When the war was over, my grandparents were so disillusioned with the way they were treated they immigrated back to Germany only to return to a country that was destroyed by war. Eventually, my mother and aunt came back to the United States, as did my grandparents, since everything in Germany was ruined.

To this day, the experience has had a profound impact on my mother and aunt. They were so concerned with the potential stigma associated with the internment; they refused to bring it up in conversation with even close friends and family. As the son of Charlotte Reseneder Dimmling, I was always told by my mother not to reveal her past for fear of being typecast by neighbors, friends and employers even though it was the mid-1970s, more than 30 years after the war ended.

Even a generation later, the pain of that episode hasn’t faded. A number of years ago, my wife asked my mother if she would be willing to tell her story to my son’s elementary school classmates, but she refused because she didn’t want her grandchildren stigmatized as she had been.

Her story, along with thousands of other German-Americans has been lost in history. Several years ago, my daughter was learning about Japanese internment and she was surprised to see that there was nothing written about German and Italian Americans interned. She brought this to the attention of her elementary school teacher who acknowledged that she never heard of others being interned. It was only through research on the Internet did she realize that other ethnic groups suffered the same ordeals as Japanese-Americans.

It is difficult to accept that my mother and aunt lost over three years of their childhood while interned in Crystal City. Those interned and their ancestors are not seeking an apology or reparations from the U.S. Government, but what we are seeking is that Congress and history books recognize the plight of many German-Americans in American internment camps.