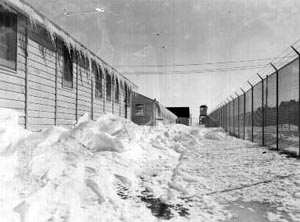 by his daughter, Maya Sapper

I am a 2nd generation Guatemalan with roots from Europe. My grandfather emigrated from Germany to Guatemala in 1884 as a young man, looking for opportunity in a new land. Years later met and married my Swiss grandmother during a visit to Europe and together they returned to Guatemala to raise their family and work the coffee plantation they owned there. In 1914 my grandfather died when my father was only 12 years old. After receiving an education in Germany and marrying his German girl friend in 1926, my father, along with his new wife returned to Guatemala to manage the plantation for his mother. They raised their 4 children on that plantation and I was born in the same house as my father was 29 years earlier. They grew coffee and sold it all over the world, including Germany and the U.S.

Leading up to the war, the United States government became suspicious of families of German ancestry. Around 1942, under the direction of the United States State Department, our family was evicted from our home and the plantation was taken away, forcing us to rent a house nearby. Soon after, father was taken, at gunpoint and put on a U.S. plane. He recalls that all the windows to the plane were closed. We had no idea where they were taking him.

Our first letters from him came from Camp Kennedy in Texas. Later letters arrived from Fort Lincoln in North Dakota. These were very difficult years, and the loss of our father left a big hole in our family. I remember sleeping in my father’s pajamas and never wanting them to be washed so that I could feel his presence while I slept. We moved to Guatemala City and first lived a hotel.

Winter inside the fence at Ft. Lincoln
John Christgau Collection

Later we lived in an unfinished house. Our family bank account was frozen and $100 a month was granted to my mother for expenses. As a young girl I imagined our money was literally frozen, not understanding what it really meant. As difficult as it was, I feel I gained value in this hardship as we learned to live with very little material “stuff”. We did not lack  love and kindness from the people around us. We were so fortunate to have had a mother who was as strong and courageous as she was and had such a great heart.

During the war, it was common for the U.S. to exchange Germans prisoners  for U.S. soldiers captured in Germany. My family was so afraid this would happen to my father, thus requiring us to leave Guatemala and move to Germany. But he stayed until the end of the war, when he was allowed to get a lawyer to take his case to court.

The lawyer exercised habeas corpus proceedings in the Federal court in Fargo, North Dakota. The State Department asked for a delay in the proceedings, claiming it needed more time to collect evidence for its case. The lawyer argued that Washington should have had its evidence ready long before anyone was imprisoned. The court agreed and on December 20, 1945, my father finally had his day in court.

The State Department produced no evidence against him and the court ordered his release. On the steps of the court as he left, he was promptly re-arrested and charged with being in the country “illegally”. He was paroled into the custody of his lawyer and somehow 4 days later, on Christmas Eve, we received the very best Christmas present ever…………..the return of my father!!

This is what Judge Knox had to say: “To deport for example an Ecuadorian, to another country we happen to occupy… that is Siberia to me. It is sailing Uncle Tom down the river. That a government can go into another country and transport a man against his will thousands of miles across the sea… is repulsive … If this situation were to become generally known, it would be subject to severest criticism.”

And so the achieves in Washington were kept secret for 50 years.  Nobody here knows about this, and still do not. But in Guatemala people remember very well. Latin American Program