“The Hard Way to Become a Citizen”

As told to grandson, Michael Murphy

The reality of World War II came knocking on the door of the Herrmann’s home in Chicago on August 6, 1942. The United States had declared war in December of the prior year but the impact on certain US residents of German descent was not fully realized until many months later. Here is one family’s story as told in their own words and actions.

Johannes Mathäus Herrmann was born in Bayreuth, Germany in 1903, the youngest of seven children. His father was a machinist at a brickyard and the family lived in a farmhouse owned by the family that owned the brickyard. His mother took care of the children, and tended to the hens, goats, geese, and an orchard. Life was comfortable.

But the idyll was broken with the start of World War I in August 1914 when Hans (as he was known) was 11 years old. His oldest brother, Georg, volunteered for the German army and was killed in France later that year. At about the same time, the owner of the brickyard was also killed in the war. By 1917, the owner’s family sold the brickyard and property, requiring the Herrmann family to relocate to the city. During this time and through the end of the war, Hans was working through a four-year apprenticeship, eventually receiving his Journeyman Diploma as a lithographer on May 1, 1920. He was not quite 17 years old.

Germany’s post-war economy suffered and there were few jobs. Hans moved to Nuremberg where he found employment off and on for a few years. After repeatedly being laid off in 1923, he considered joining the army because it was a steady job, but his family was against it. One of his sisters knew of a position painting chinaware, which kept him busy through May 1925. At that moment, another sister who had been in the United States since 1923 asked if he would be interested in joining her and her husband in America. He agreed and, after making travel arrangements and getting his visa, he left Bayreuth on June 3, 1925. At Cuxhaven, a North Sea port northwest of Hamburg, he boarded the passenger liner SS Deutschland on June 5 for a 10-day journey to New York City.

He was quickly processed through Ellis Island and boarded a train to Chicago along with other new arrivals, reaching Union Station the morning of June 16. Hans took a cab to his sister’s house, who was waiting with want ads from three shops looking for a lithographer. By noon the next day, he had a job with Curt Teich and Company, Inc.

While Hans had informally studied English prior to the trip using a book called “A Thousand Words in English” – which he credited for his successful navigation through New York – he started evening English classes on September 8 at Lake View High School. There he met many others – Swedes, Norwegians, and Germans – in similar circumstances and of a similar age. It was through the encouragement of these friends that he joined the Chicago Sports Club, a soccer club. 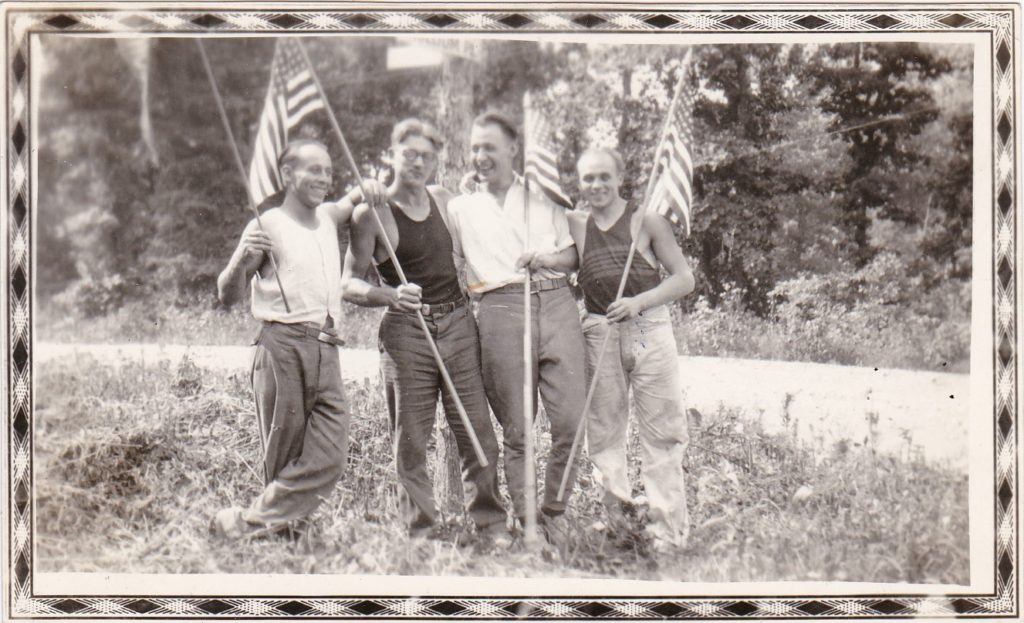 Hans writes,1 “The second year at evening school I took a citizenship class and learned about government and the Constitution of the United States. I was well prepared to become a citizen and applied for my first paper [Declaration of Intention] but neglected to go for the second paper [Petition] or the citizenship paper [Certificate of Citizenship].” Life continued for Hans, marrying Ella Ditz, who immigrated from Hamburg in 1927, in 1929 and having a daughter, Barbara, in 1930.

“Even after our marriage, while life was good and I had a good job and fine family, I finally started to begin to take out first papers again. By that time war had broken out in Europe and everything showed clearly that the USA would be involved, too. By then we heard of a German organization that urged all German ‘noncitizens’ to join so we could help each other in case of hardship if war broke out. We joined. It was absolutely nonpolitical. And for sure, as war broke out December 7th, we all had to register as Enemy Aliens and our movements were restricted. That meant that we needed permits if we wanted to travel, etc. I also registered for the draft. Everything was like before – no hardships. Only we realized what we missed by not having citizenship papers.

“On August 6, 1942, in the evening, two FBI agents came to us and took me away for a hearing. I was delivered to a big private house on the South Side [of Chicago], where there were many other Germans, Italians, and Japanese. It was very crowded and I also met other fellows I knew. At a hearing the next day – it was very short and also very insulting – I had the feeling that I wasn’t coming home. And about two weeks later with a heavily armed escort we were shipped to Camp McCoy in Wisconsin, an Army camp.

“In the meantime my family had to go through a harder time than I. Mama [wife Ella] had to give up our home and did housework. [Daughter] Barbara lived in my sister’s house for a while and Mama found another job as a saleslady in a delicatessen store. She was able again to have a little apartment and Barbara could come home again.

“While at Camp McCoy, I tried to get a hearing, but the Army had nothing to do with it. In the Spring 1943, we were shipped to Fort Lincoln near Bismarck, ND. This camp was also a former Army camp but the Immigration Service took it over. It was very orderly but also crowded – Germans, Japanese, and Italians – and many hundred Germans from every South American nation from Mexico to Chile, mostly wealthy businessmen.

“Then one day, the Forest Service appealed for volunteers as fire fighters, etc. on a bulletin board in camp. I figured that I would have a chance to get home if I showed my loyalty and I signed up with the Forest Service. In a forest camp near Boise, Idaho2  we were trained to handle all kind of heavy equipment, and we put out many big forest fires that were started by Japanese fire bombs. The Japanese sent those bombs attached to small balloons across the Pacific Ocean into the woods of the Northwest. (A report by the Forest Service said, even now in 1985, they find unexploded bombs on the West coast.) We were pretty free and associated with people in the towns and were also very respected. When not fighting fires, we planted young trees, built small bridges (out of wood), and built roads and paths. I even worked in an office of the Forest Service to do lettering on maps. We fought fires with many fellows in Montana, Washington, Oregon, and Idaho, and made many friends.

“This is my story and you could probably give it the title, ‘The hard way to become a citizen!’”

As readers of other stories on this web site understand, the impact of detention extends beyond the person interned; it affects the entire family. As further evidence, here is a perspective from Hans’s wife, Ella, from a 1992 letter.3

“We belonged to the German Sport Club (it had nothing to do with politics). The men played soccer Sunday mornings, and the ladies played volleyball and went swimming on Thursday evenings – so there was someone with the children since there were no babysitters at that time. At the last dance at the German Club at North Avenue Chicago, we heard that some had been picked up by the FBI.

“When they came for Grandpa [Hans], he had just called me to say that he had to work later – something had gone wrong and he had to repair the [printing] plates. Three men – it was always three, never one alone – waited in the car. I brought his clothes the next day to the South Side in a large house, but I could not see him. Later I could take your mom [Barbara] (she was just a little girl). There were two soldiers with guns next to us and two FBI men with us between Grandpa and us. I could not touch him, and we had to speak English.

“Later, when the men had a so-called ‘hearing,’ they asked why they were there. The answer was ‘You are here to answer questions, not to ask them.’ Approximately six months later the FBI pushed the men off to the Army; they could find nothing against them.

“The Army was in Camp McCoy, Wisconsin. I got permission for both of us [wife Ella and daughter Barbara] to visit him at Christmas. There we were with him in a room alone. That was nice – but hard to leave. We stayed in the only old hotel. Down at the bar young, homesick soldiers were singing for a white Christmas all night. And there was soon much snow outside!

“A year later, the Army didn’t want to be responsible for them any more and pushed them off to the Immigration Service that was in Bismarck, North Dakota. They called once that he had a strangulated hernia. I went alone there. Grandpa volunteered in the hospital to made beds and cooked oatmeal in the morning. (We had to eat oatmeal every morning when he came home.) They were paid for their food the same as for soldiers. Having butchers and bakers in the bunch, they had quite different food than the soldiers. They invited the Immigration people often for dinner. They could never understand why the men were there. When he came home, the head nurse gave Grandpa a nice bar of soap for me and later sent him a letter thanking him – that he was missed!

“I am so sorry to hear that the hate starts again against the Japanese people.4 Four generations here. It’s sad. Nobody ever heard about the German camps. We were never allowed to talk about it. Hope it doesn’t happen again. ‘Now you know the rest of the story.’5”

The perspective of the third member of the family, Barbara, is not fully known but there is evidence it was traumatic. She was all of 12 years old when her father was detained, she lost her home, and she and her mother lived without him for three years. As an adult she refused to speak openly about the event and never committed anything to writing.

There were times when she attempted to suppress the incident. As an example, Barbara had her parents complete a “Grandmother Remembers” book of memories6 in support of documenting the family’s history. In a section headed “Some important events I remember,” Hans appears to have written a brief paragraph describing the time of his detention. However, Barbara pasted a piece of cardboard over his entry. A bit of text is visible by lifting a lower corner, and it’s clear it is written in Hans’s handwriting and the words “movement,” “registered, and “Draft board” are visible, but all else is obscured and would be damaged if the cardboard were removed. It was a partially successful attempt to hide her painful memory.

Despite the treatment of the Herrmann family by the American government, they were never resentful. Hans and Ella became naturalized citizens, continued successful careers, moved to a beautiful home in the Chicago suburbs, and retired to Sun City, Arizona. They were the epitome of the American dream. And Barbara was the first in her family to graduate from college, married, and raised a family of her own.