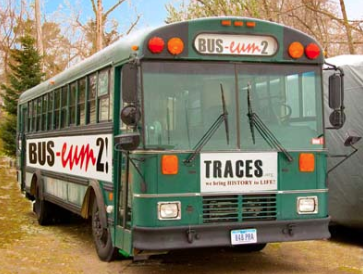 Some disappeared under the cover of night, while others were taken during raids on their place of employment. About a third were kidnapped by U.S. agents in other countries and brought here by force. None had a lawyer, or were charged with, tried for or convicted of a war-related crime. Many were imprisoned for the duration of that global war, and for years after it ended.

Suspected terrorists Inmates at Guantanamo Bay No: 15,000 German-American civilians the U.S. Government interned between 1941 and 1948.

TRACES Center for History and Culture is a Midwest/WWII-history museum in downtown Saint Paul/MN’s historical Landmark Center (former Federal Courts Building ). Each of its more than two dozen exhibits about Midwesterners’ encounters with Germans or Austrians between 1933 and 1948 forms part of a larger mosaic, a fuller image of a war that is often misunderstood or seen in clichés. At TRACES, WWII is a case study from which to learn today.

The main goals of this mobile exhibit include presenting an unknown history to a wide audience, stimulating penetrating questions on the part of visitors to the exhibit and then leading them to open discussion. It explores a virtually unknown yet significant historical event-possibly one of the U.S. ‘s least-known WWII sub-chapters. Especially relevant as the Midwest served as the site of 16 German-American internment camps or detention centers, communities across the region will have an opportunity-in most cases for the first time-to discuss the legacy as well as implications of the U.S. Government’s WWII “enemy alien” internment program.

At select showings former internees or their children will appear as guest speakers and share what internment meant to them and their families. At all showings related print and electronic documentation will be available for purchase.

A “community conversation” will accompany many of the BUS-eum 2 showings: in addition to welcoming community members to see the BUS’s ten narrative panels and view two films about this internment, some participating hosts will hold a panel-led open discussion about this topic. Host-selected local leaders (educators, clergy, journalists, public officials, military officials, students, business people, etc.) will discuss the following or other “guiding questions”: -Are ethnic background or ideology justifiable grounds for internment (in other words, imprisoning suspects for who they are or what they believe, as opposed to their actions)

-Does society “owe” due process only to citizens, or also to legal non-citizen residents

-During WWII the U.S. Government forcibly removed 4,058 Latin American Germans from South America to camps in Texas , at Ellis Island and elsewhere [just as it also interned 2,200 Peruvian Japanese alongside indigenous Japanese Americans]: what are some of this action’s legal and moral implications Was this action effective

-“Enemy-alien” internment was a multi-million-dollar, seven-year U.S. Government project: was it effective (i.e., did it reach its intended aims) or not What other actions might have been taken, rather than to intern some 150,000 Japanese, Italian and German Americans

-Both camp staff and many of those interned were sworn to secrecy. In 1988 the U.S. Government acknowledged that it had interned Japanese Americans during WWII, and in 2000 it admitted that it also had imprisoned Italian Americans; to date, however, it has never confessed to having interned German Americans. To what extent, for how long, is a government accountable for its actions Does it “owe” reparations to those wrongfully harmed If so, in what form

Through this project, Midwesterners will see WWII history in a new way, and “re-visit” an event and a period often overly-simplified and obscured by bravado. The community conversations are meant to support democratic involvement and processes.

(Early arrival is encouraged, as the tour is tightly scheduled and showings will begin and end promptly at the times indicated. TRACES seeks volunteers in each community along the route, to help make each stop as effective as possible: would-be volunteers should contact the local hosts in a given town, or TRACES directly.)

To confirm the BUS-eum’s itinerary or learn more this exhibit, see www.TRACES.org. The exhibit’s texts and photos of the exhibit can be previewed at that web site; reading the narrative in advance facilitates speedier visitor flow in the BUS. Educators are welcome to utilize the teaching materials also posted on the same web site.