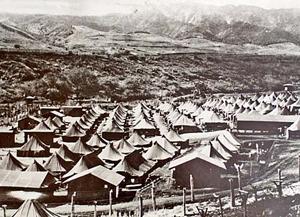 The National Park Service released a draft study on May 8, 2014 proposing that Honouliuli Internment Camp, where Japanese and European American residents from Hawai’i were incarcerated during World War II, be added to the National Park System as a National Historic Site or National Monument.

“Telling all the major stories of our country’s history as fully as possible is an important part of the National Park Service’s mission,” stated Pacific West Regional Director Chris Lehnertz. “That includes not just the stories of which we’re proud, but those that cover less honorable chapters in America’s past.”

The National Park Service currently manages three sites within the United States where Japanese Americans and others were incarcerated during World War II, but this would be the first in Hawai’i.

The Honouliuli study evaluates 17 sites that represent the stories and impacts of internment in Hawai’i. While many of the sites are listed, or eligible to be listed, on the National Register of Historic Places, two stand out: the Honouliuli Internment Camp and the U.S. Immigration Station. The study finds that these two sites depict a distinct and important aspect of American history associated with civil rights in times of conflict that is not adequately represented or protected elsewhere, and are therefore suitable for inclusion in the National Park System. Of these, only the Honouliuli Internment Camp itself is determined to be a feasible addition to the system.

Under the study’s preferred alternative a national historic site or national monument managed by the NPS would be established as a new unit of the National Park System. The national historic site or national monument would include the site of the Honouliuli Internment Camp, which would be transferred to the NPS by donation, as well as adjacent lands to provide road access and opportunities for visitor services.

Congress authorized this study in 2009, and thepublic was invited in 2011 to provide input.  With this release of the draft study report, the public is again asked to share their thoughts with the NPS.

Public comments are welcomed by mail, e-mail, or entered directly into the NPS online public comment system throughJuly 15, 2014.  In addition, the NPS will host a series of public meetings throughout Hawai’i during May and June 2014 in order to present the draft study report, answer questions, and accept comments.

The executive summary, full report, and the NPS public comment system are available at the study web site: http://www.nps.gov/pwro/honouliuli

Following receipt and review of public comments, a final report, including a course of action recommended by the Secretary of the Interior, will be transmitted to Congress.