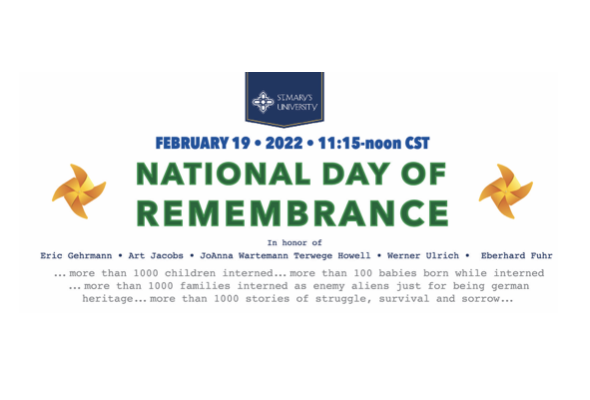 Disturbed that the National Museum of American History in Washington, DC planned a February 2022 three-day commemoration focused solely on Japanese American relocation during WWII, students in Teresa Van Hoy’s history classes at St. Mary’s University, San Antonio, Texas, gathered on-campus February 19, 2022 to honor German Americans and Latin Americans who were similarly imprisoned. A spokesman for Rep. Joaquin Castro announced a proposed bill in Congress that would, if passed,  formally acknowledge that people of German ethnicity were also subjected to civil rights abuses by the U.S. government during WWII. Students held photographs and read brief biographies of some of the internees who were children at the time, and yellow rose petals were scattered in memory of the parents as the campus bells rang noon. (more about the students’ efforts)