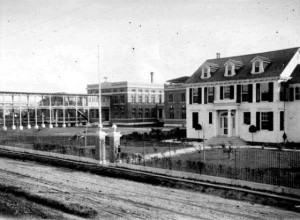 Camp Algiers, a former INS quarantine station, was used to house enemy aliens during World War II. Located across the Mississippi River from New Orleans, this is where many of the civilians deported from Latin America entered the U.S. At the Algiers INS station, new arrivals were stripped, showered and then sprayed with insecticide. (Bannerman Report to Fitch 3-28-44) (See also: the Latin American Program)

Like Angel Island and Terminal Island, in California, arrivals were interrogated and given hearings to determine their “right” to enter the U.S. Since most had been forced to surrender their papers to U.S. officials on the transports that brought them to the U.S., they were declared to have entered the country illegally. This allowed indefinite detention, and was used to justify U.S. officials’ attempts to repatriate them to the countries of their ethnic origin at war’s end.

The facility had kitchens for family meals, while single men ate together. There was no canteen. Work was available for internees at various camp duties. Handicrafts made by the inmates were sold in New Orleans stores. While most stays were temporary, a small number lived here for some length of time. Latin American Jews, militant German nationalists, and a handful of avowed anti-Nazis coexisted here, not without incidents. (Krammer, Undue Process, p. 108.) For more information about the Latin American Jews interned, see “Jewish Internees in the American South, 1942-1945,” by Harvey Strum. On pages 36-37 is a brief description of Camp Algiers.

Recently, both a two-part podcast and a documentary have explored Camp Algiers’ housing of enemy aliens in WW II. In January 2017, WWNO, a radio station in New Orleans, LA, featured the WWII history of Camp Algiers in a two part podcast.   Part 1 Part 2     “Camp of the Innocents,”  a documentary published May 24, 2017, was produced by Tulane University students.