Hugo Droege emigrated from Germany to the Guatemalan highlands to find a better life. He married and lived quietly for 20 years far from Germany. He established and managed a coffee farm as he raised his family.

One night, six Guatemalan police arrived with guns drawn to take him away.  Mr. Droege told his wife, Oda Lutzow, to save the farm. Forty-eight hours later, the Guatemalan government forced her to abandon it. Pregnant with their third child, she, her two children and a mule, carrying the belongings they were allowed to take, left the farm to live with friends. There she worked at a store to earn her keep and contribute to food, buy clothing for her kids and send them to school.

The Guatemalan police turned Mr. Droege over to American soldiers. He did not see his family again for five years. In December 1942, General George Marshall initiated the secret operation that led to Mr. Droege’s capture by sending a secret order to the US Caribbean Defense Command: “These interned nationals are to be used for exchange with interned American civilian nationals.” Pursuant to Marshall’s order, thousands like Mr. Droege from 12 Latin American countries were forcibly kidnapped and shipped to the US guarded by armed American soldiers.  (More Information about the Latin American Program) 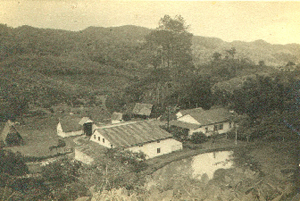 After being told he was going on a boat, Mr. Droege was strip-searched six times. Soldiers held him and hundreds of others in darkness below the ship’s deck for what ended up being a month-long voyage to America. After six days in the dark, they were allowed to go on deck for a half an hour to see daylight. They were locked up like criminals and did not speak to each other. Open buckets were placed conveniently among the prisoners for bathroom use. The stench eventually stifled their hunger. Terror reigned. One man died.

Many first saw the US in New Orleans. Until their exchanges were scheduled, the Latin Americans were held in various US internment camps. Many of the men landed at Camp Kenedy in Texas. Hugo Droege begged not to be sent back.  He was told you have to go, tied up or on your own two feet. One month later, he was shipped to Germany at the height of the Allied bombing.

During the five years he was away from Guatemala, survival was very difficult. He tried to escape 3 times on foot and at night to Paris, where an uncle had promised to hide him and buy him a flight home. He got caught twice but succeeded the 3rd time, but by then the war was over. This uncle took him in though and organized a flight back home for him as soon as possible. When he finally returned to Guatemala, the family had nothing left. The government had taken the farm, his bank account had been frozen and it disappeared, and his wife was suffering with heavy depression. His 3 children didn’t know him.

Mr. Droege believes that the Latin American countries cooperated with the United States so that they could confiscate the property of those kidnapped. Countries throughout Latin America profited the same way, seizing farms and businesses from those they turned over to the United States. His wife and three children were virtually destitute. Mr. Droege rebuilt his life when he returned, by managing another farm. He did visit San Vicente once, although it was very painful to go back. He met one of his former employees, very elderly by then, who thanked him again for saving his life. The man had fallen into a cave and would have died if Mr. Droege had not gotten him out.

Eventually, Mr. Droege was able to purchase a farm which he named “Constancia” – named for his constant persistence and determination. It was a difficult life. Two more children were born and Mr. Droege made sure they graduated from college.

The plight of German Latin Americans has yet to be acknowledged.  Just after his 100th birthday, the patient Hugo Droege passed away, still waiting.