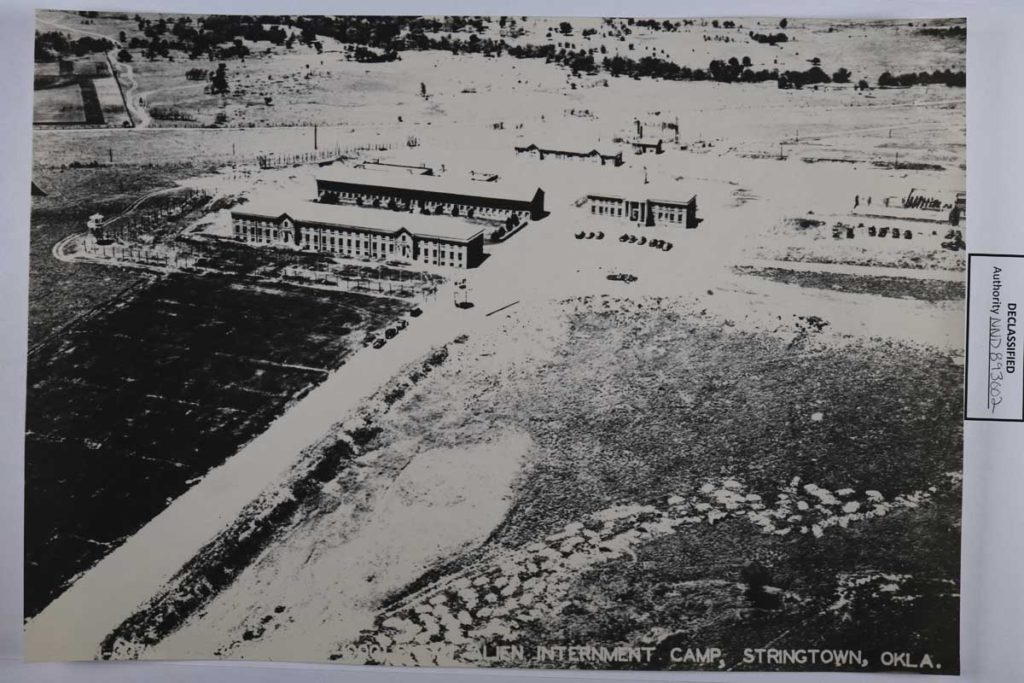 Administration Building – Former site of Stringtown Internment Camp. This building is one of the remaining structures from the time of the internment camp. Stringtown Prison, Stringtown, Oklahoma

During the early months of World War II, and after initial processing, many internees were sent to the prison in Stringtown, Oklahoma, which was operated by the US Army. The prison started accepting internees on March 30, 1942 and was located four miles north of Stringtown, on the west side of highway 69. The camp was previously a sub-prison, established in 1933, to relieve overcrowding at the Oklahoma State Penitentiary. Stringtown had a capacity of 500 and held primarily German internees, but some Italians and Japanese were also held there. (See map) The internees were divided into 3 companies with an officer, NCO and company clerk assigned to each company. The camp commander ran the camp pursuant to strict rules which provided that under some circumstances, such as attempted escape, internees were to be shot. (rosters of inmates: 31 Aug 1942, 30 Sept 1942, 1 Dec 1942)

Although the environment at Stringtown was described as bleak, most internees made the best of it by keeping the living quarters (former inmate cells and added barracks), as clean as possible and engaging in meaningful hobbies. Also, internees were responsible for preparing their own food. Guards and administrators reported that the meals for the internees were much better tasting than the food they received. 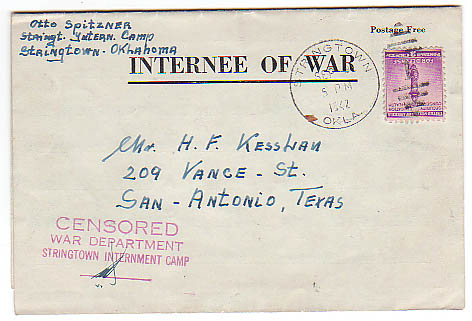 There was a small, vocal Nazi element at Stringtown, estimated to be less than 3% of the general population. This element had an unsettling effect on the atmosphere of the camp, especially for the few German Jews who were interned there. Two German internees died at the camp and are buried at Ft. Reno.

The camp was inspected periodically by Swiss Legation representatives in charge of German interests. In the first report, they state; “The appearance and atmosphere of this camp are those of a penal institution…” Badly overcrowded sleeping quarters, inadequate washing and toilet facilities, poor sanitation in a temporary infirmary, no dental care, and bedbugs were some of the concerns. Jewish internees complained of constant harassment by Nazi-leaning internees. Conditions were considered much improved in the second and third reports.  25-28 June 1942, 21-23 September, 1942 and 4 Dec 1943. (The third report is after all civilian internees had been transferred and the facility housed only POWs.)

The “permanent” status of Stringtown turned out to be short lived because it was closed in June of 1943. By then most Stringtown internees had been transferred to camps run by U.S. Border Patrol personnel under the jurisdiction of the Department of Justice. For the remainder of World War II, Stringtown housed German POWs. The site now contains the Mack Alford Correctional Center, a medium security prison.