In Hawai’i a number of camps housed enemy aliens, either temporarily or more permanently. Kilauea Military Camp on the island of Hawai’i, Ha’iku on Maui, the Kalaheo Stockade on Kaua’i, Sand Island off the Honolulu coast, and Camp Honouliuli in the Waianae Mountains above Pearl Harbor, O’ahu were some of them.

In Camp Honouliuli, run by the Army, Japanese and German American internees were housed in barracks or tents and segregated into separate areas of the camp. As in mainland camps, prisoners were able to work within the grounds, for ten cents an hour. In this camp, too, residents sought to make their accommodations both more comfortable and more attractive. Using their own money for supplies, they built porches and planted flower and vegetable gardens. Unlike military facilities elsewhere, internees were able to visit together with their families in the relaxed environment of the mess hall during the twice monthly visits allowed. Camp Honouliuli was operational from 1943-1945. (More firsthand accounts in Real People. Also, see Berg family story.) 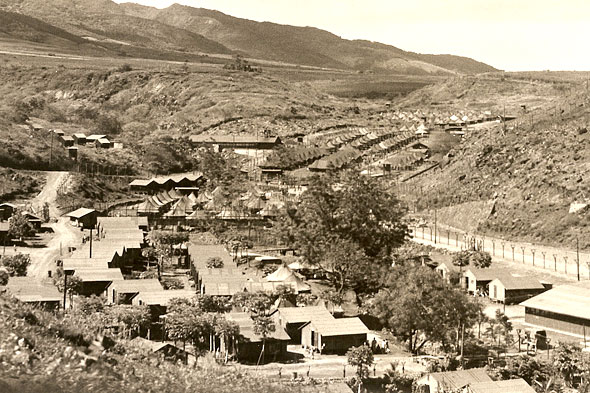 What remains of Camp Honouliuili today is hidden in the overgrowth. 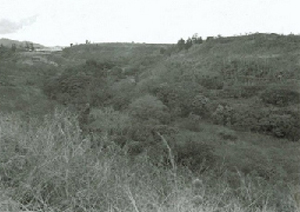