Fort Stanton is located in a remote part of New Mexico, 35 miles north of Ruidoso. It was established by the Army in 1861 to protect Hispanic settlements along the Rio Bonito from Apache raids. After a colorful history involving the Civil War, Kit Carson, Billy the Kid and other notables the fort was decommissioned by the Army in 1896. In 1899 it was transferred to the United States Public Health Service to be used for a tuberculosis sanatorium for men from the Merchant Marine, Coast Guard and Navy.

Before and during World War II, the fort was used as an internment camp. The first residents of the Fort Stanton Internment Camp arrived in 1941. They were the German crew of the German luxury liner Columbus, which had been scuttled off the coast of Cuba and initially housed at Angel Island, California. At first these internees were labeled as “distressed seamen paroled from the German Embassy”, but when the U.S. entered the war, the U.S. Department of Justice formalized the seamen’s internee status and tightened security at the fort by surrounding the barracks with barbed-wire fencing and bringing in border patrol agents as guards. (More information about the SS Columbus and its crew at Angel Island and Fort Stanton)

Later other internees were brought to Ft. Stanton, both German and Japanese. Some historians believe that many of the men sent to Ft. Stanton during this time, had, for some reason, been branded as troublemakers and were therefore sent here to be “segregated” from the rest of the internee population. Security at Ft. Stanton was said to be the most stringent of any of the internment camps. 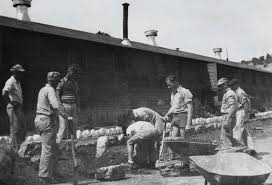 In 1953 the State of New Mexico took over Ft. Stanton and continued to operate it as a tuberculosis sanitarium until 1966 when it was converted to Ft. Stanton Hospital and Training Center for the Developmentally Disabled. In 1996 the fort became a minimum security state corrections facility. It was used in this capacity until 1999, when it was leased to Amity International which currently operates it as a rehabilitation center.  Subsequently, the facility became a museum.    Ft. Stanton State Monument website