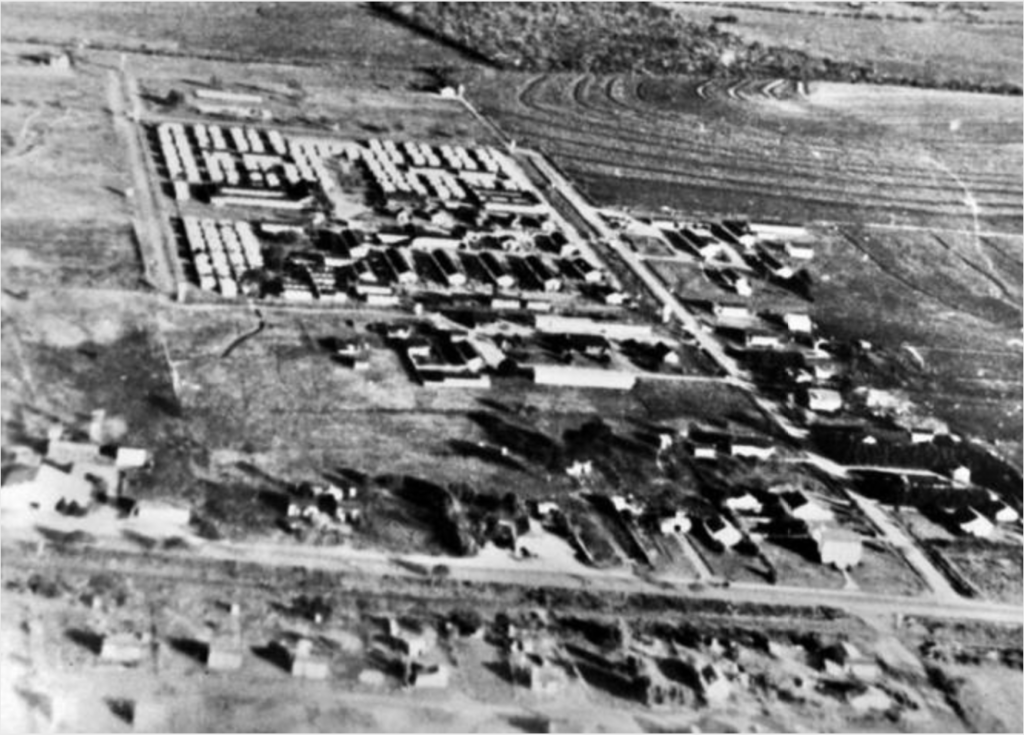 Hoping to provide residents more employment opportunities, officials of the town of Kenedy, Texas, lobbied the government to establish an enemy alien internment camp on the site of a former Civilian Conservation Corps (CCC) camp near the town. Work began to enlarge the original facilities in February 1942 and the first civilian “enemy aliens,” men of German and Japanese as well as a few of Italian ethnicity, moved in on April 23, 1942. Most of the men housed at this site were from Latin America, although there were also some California Japanese. (See manifest with names of twenty-one German Haitian men taken from Port au Prince to Kenedy.) 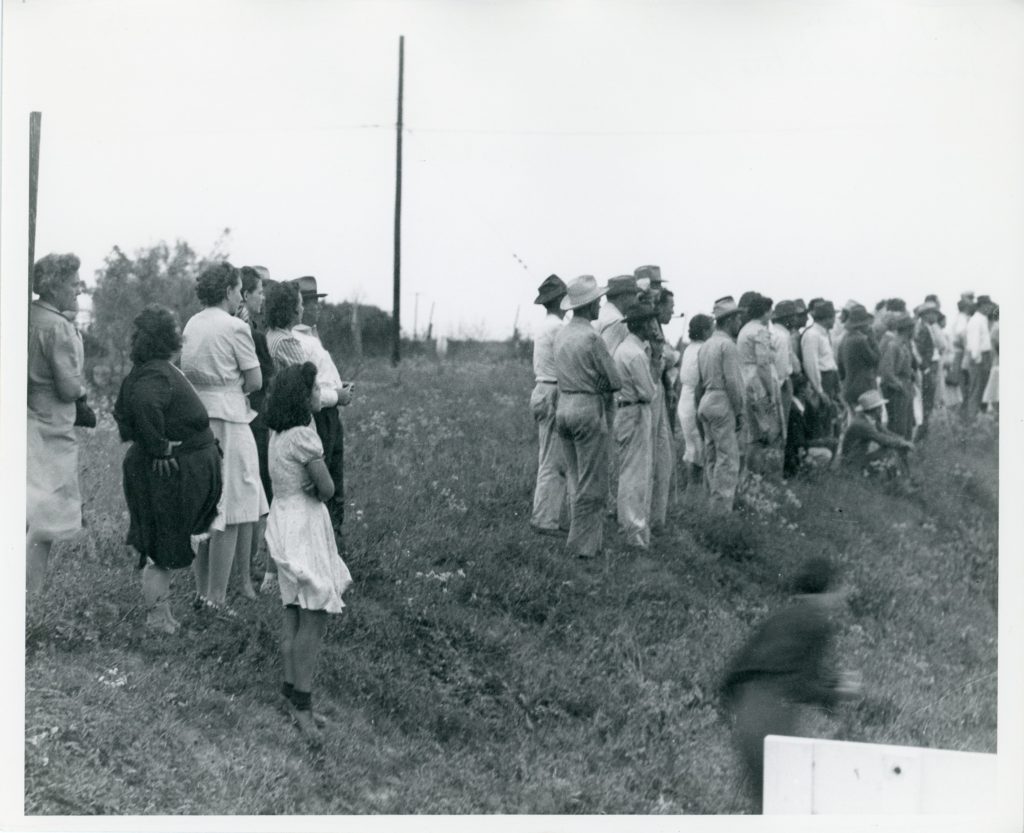 Because the Immigration and Naturalization Service considered camp stays here temporary, conditions were originally bleak. Poorly insulated, leaking “Victory Huts” and old CCC barracks provided shelter. Housing was later augmented with over 200 new prefabricated dwellings for 5 or 6 internees. On 4 May 1942, Albert Greutert, Acting Swiss Consul, representing German and Italian interests, and F. van den Arend, Special Division, Department of State, evaluated buildings, security, medical and recreational facilities and morale of detainees at Camp Kenedy and Fort Sam Houston, in San Antonio, Texas. (The report on Kenedy is the first fourteen pages.) on Oct. 13-14, 1942, P. W. Herrick, Department of State, issued a follow-up report. On Oct. 31, 1942, a census was taken of all prisoners and the countries from which they were taken. All were Latin American at that time.

Camp Kenedy was reserved for men, many separated from family members who were sent to other camps. The population of the camp and the nationalities housed there fluctuated greatly, as groups left for other camps or were shipped out to be repatriated. At first, there were no Spanish speaking censors assigned to this camp, so inmates from Latin America were not allowed to write letters in Spanish to their wives and children.

Troublemakers from other camps were often sent here. Fist fights, hunger strikes, production and drinking of alcohol and attempted escapes raised tensions and increased discipline problems. Frequent turnover of the population also made it difficult to create a stable, peaceful environment. Population ranged from around 600 to 1000 prisoners.

Jewish detainees being held in the Kenedy, Texas Internment Camp, wrote to W. Bruppacher, Department of German Interests, Legation of Switzerland, in February 1943, following up on a meeting they’d had during a camp inspection. They express concerns about finances, censorship, and the difficulties of living “close to our worst enemies.” (the letter)

In spite of these problems, most prisoners were law-abiding and sought to be productive. Protestant services, offered in German every other week by Pastor Fritz Sandner from Guatemala and Catholic masses, offered almost daily in the German language by Father Hubert Kueches of Puerto Rico, were usually well attended. Classes were offered, taught by fellow inmates, and a library was maintained. Internees worked outside of the camp, as well as staffing the hospital, a laundry, and small store inside the barbed wire fence.

When the Camp closed in September 1944, the German internees were moved to Fort Lincoln, ND. The U.S. Army then took over the facility and Kenedy became a prisoner of war camp. Below is a photograph of one train arriving with German internees. The second shows internees leaving the camp for a train that took them to ships, for repatriation to Germany. (more photographs) 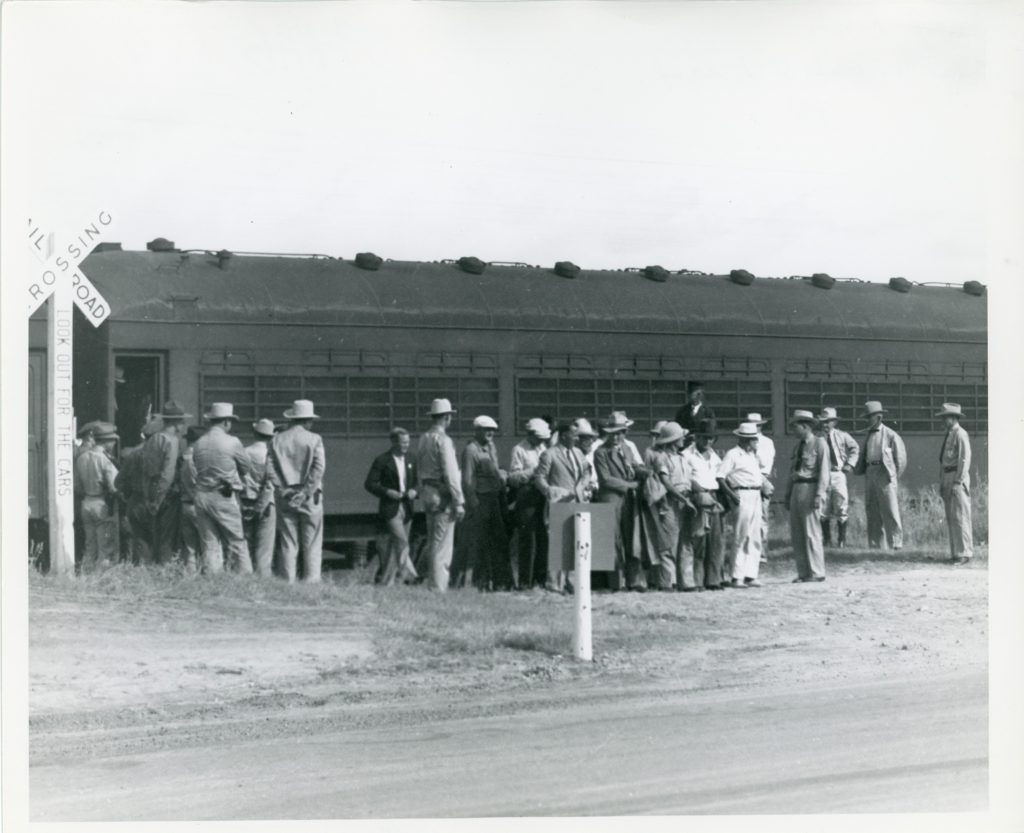 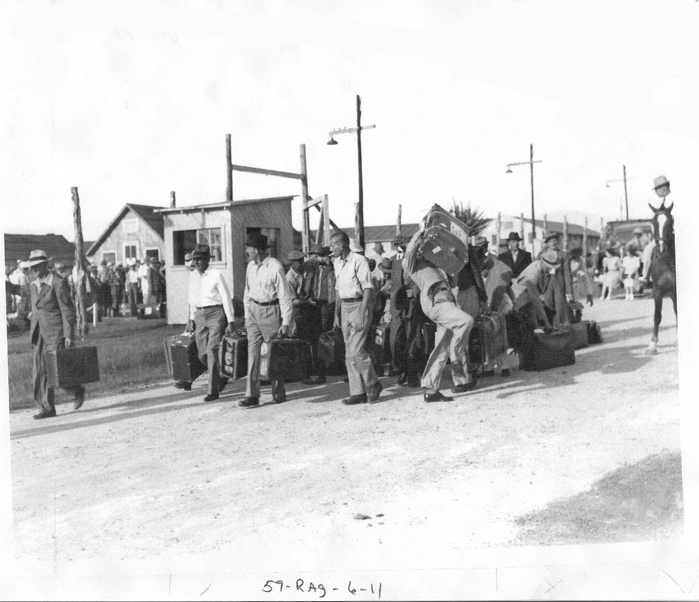 German internees at Camp Kenedy, Texas in 1942, leaving for repatriation to Germany.