Angel Island, in San Francisco Bay, was the official Immigration and Naturalization Station for the area, but in 1940 a fire destroyed three buildings at the site. The arrests of civilian “enemy aliens” from Northern California in World War II soon filled a temporary station, set up at 801 Silver Avenue in San Francisco, to capacity. Sharp Park Detention Station (later referred to as Camp Sharp Park) was then opened in March 1942 by the INS, at the site of a former state relief camp 12 miles south of the city.

A ten-foot high fence and additional barracks were built, increasing holding capacity from 450 to 1,200. The German, Italian, and Japanese immigrant detainees were held here temporarily, until sent on to more permanent facilities. On July 15, 1943, 119 Peruvian Japanese were also housed at the Station, but were soon sent on to Fort Missoula, Montana. Sharp Park closed in 1946. (Inspection reports: 1943, 1944 See also:  the Voester Story) 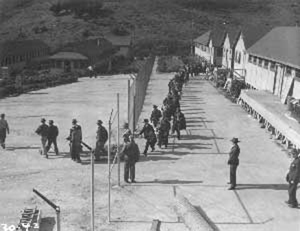 Aliens at the Camp Sharp Detention Station prior to transfer to internment camps. Photo by Clem Albers, Bancroft Library, UC-Berkeley 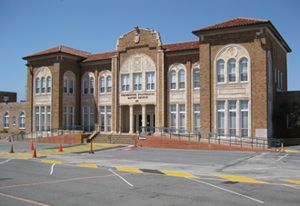 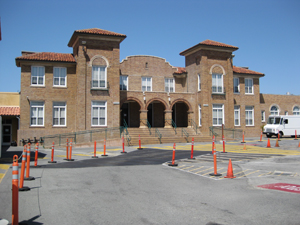